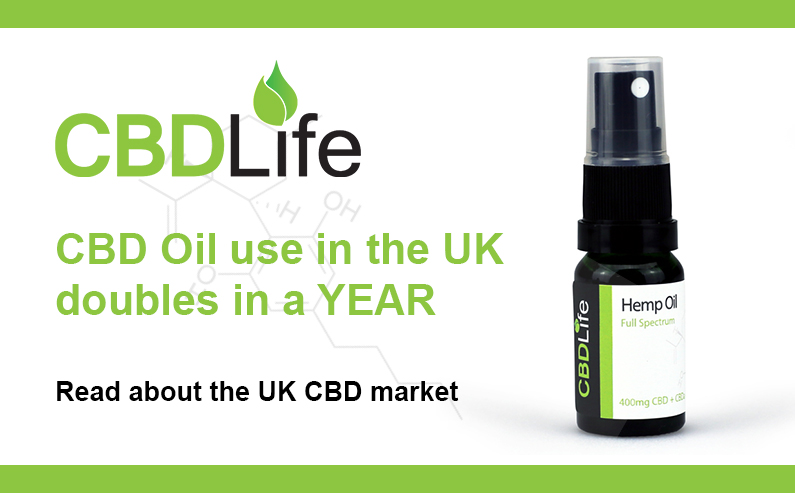 It’s no secret that the CBD and hemp market has been expanding rapidly, but a UK Trade organisation has now revealed that the use of CBD oil in Britain has doubled in a year…yes, DOUBLED.

The Cannabis Trades Association UK (CTAUK)-who oversee the cannabidiol and hemp market, have published a study revealing astonishing figures. 250,000 people are now using CBD oil. They also added that the number of users is up from 125,000 last year which means there are approximately around 1,000 new users to CBD every single month!

The medical value of CBD was recognized by The UK Government in 2016, stating that cannabinoid has “restoring, correcting, or modifying” properties and many retailers have begun selling CBD as food supplements. In England and Wales, it has been legal to buy in the UK since last year, after the Government approved its use as a medicine under licence.

The Chairman of CTAUK, Mike Harlington, said: “We’ve known about the endocannabinoid system for 40 years or so but it has been ignored to a greater or lesser degree”

“Products like CBD, because of where it comes from, are stigmatized despite the fact that every mammal has an endocannabinoid system and is therefore designed to use cannabinoids naturally”

“Cannabinoid deficiencies are starting to become understood by the medical world, and it is slowly becoming obvious that cannabinoids like CBD are actually essential for general health and well-being.” Mike is calling for a better understanding of CBD in the hopes that education will help eradicate the existing stigma around anything derived from cannabis.”

The debate around medical cannabis in the UK continues, and as time goes on, is receiving more and more attention.

May 21, 2018
We use cookies on our website to give you the most relevant experience by remembering your preferences and repeat visits. By clicking “Accept”, you consent to the use of ALL the cookies.
Cookie settingsACCEPTREJECT
Manage consent