Remove the make up and the masks and this Father-of-three loves nothing more than watching cartoons and taking care of his pets. But, he’s not be underestimated.

Colin “The Freakshow” Fletcher opened the main card for The UFC 158 in front of a staggering 29,000 people. A moment that he describes as being the pinnacle of his career. 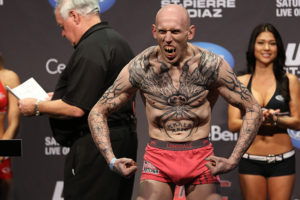 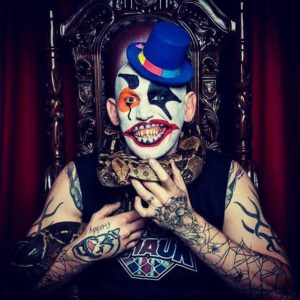 Fletcher took up Mixed Martial Arts nine years ago. He attended his first Jui Jitsu class and after seeing younger fighters such as Ryan Scope with amazing skill and talent at the top of their games, he believed he too, that there was nothing stopping him from making it to the top.

He said: “From very early on I took to MMA well.  I’ve been a multiple European and British champion and The Made For The Cage world champion. I also was a finalist in the UK VS Australia Ultimate Fighter and I’ve fought for the UFC. I’m now currently contracted to fight for Bamma and Bellator.”

Colin first heard about CBD Life UK on the grapevine.

“I’m not a great sleeper and I find that using CBD Life UK PurePen Grand Daddy Purple product really helps me to relax and sleep. I use the spray under my tongue the most but also use the CBD capsules as well.”

In 2015 Colin feared that his MMA career could be over after a serious injury left him out of the scene for months. Now, he’s back at the top and although he may have a gruelling six-hour daily training regime that isn’t for the faint hearted, he said: “I’m so blessed to be able to say that I do a sport I love as a job-not everyone can say they enjoy their line of work.”

Colin will next be in action on December 15th fighting for Bellator against top European fighter Anthony Dizy at the Metro Radio Arena, Newcastle.