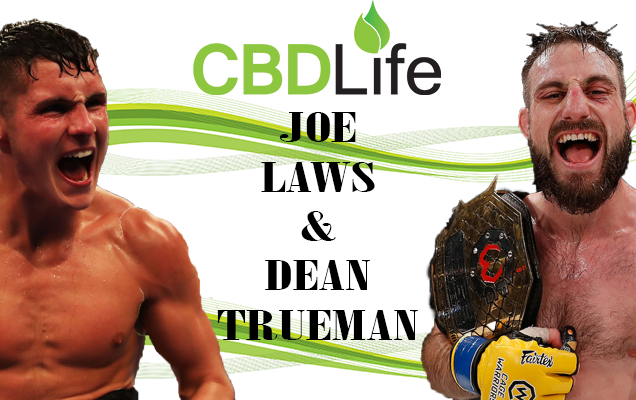 CBDLife are delighted to announce that Joe Laws and Dean Trueman have been added to our list of sponsored athletes.

Dean Trueman is a mixed martial artist with a professional record of 10-5-0.

Last year, Dean found his way to the Cage Warriors Featherweight title after winning their 4-man Featherweight tournament, where he saw off Lewis Monarch and Aiden Lee in impressive style.

Last time out, Trueman faced a tough title defence against former UFC star Mads Burnell. Burnell walked away with the victory after catching Trueman in the second round with a Japanese Neck Tie. The loss has added even more fuel to Trueman’s desire to firmly cement his name at the very top of Cage Warriors Featherweight Division.

The promotion has announced the featherweight’s next fight will be on October 26 at the Restorts World Arena when he looks to get back to winning ways on Cage Warriors 109, on his road to regain the 145lb strap.

Having only turned professional last July, Laws has had an extremely active 13 months. 3 wins by decision and 3 by way of TKO later and he is already being talked about by many boxing experts as a one to watch. Laws always brings a show when boxing, notably making his ring walk donning a ‘lucha libre’ mask and sombrero.

His fans, affectionately known as the Bomb Squad, are always out in force whenever and wherever the ‘Benwell Bomber’ is in the ring.  Although still in the infancy of his professional career, Laws has already fought on the biggest stage in the North East when he appeared on Matchroom Boxing’s Ritson vs Patera card at the Utilita Arena- with almost 1,000 of his ‘Bomb Squad’ in attendance.

Laws next makes the walk on September 28th at the Eagles Community Arena when he features on the MTK Fight Night: Newcastle.

Do Plants Other Than Cannabis Contain Cannabinoids?

Save On Your CBD Vapes

January 10, 2020
We use cookies on our website to give you the most relevant experience by remembering your preferences and repeat visits. By clicking “Accept”, you consent to the use of ALL the cookies.
Cookie settingsACCEPTREJECT
Manage consent