Describing fighting in the UFC as his ultimate dream come true, in May 2017 James “The Juggernaut” Mulheron’s dream became a reality when he signed a four-fight deal with the worlds biggest mixed martial arts company. 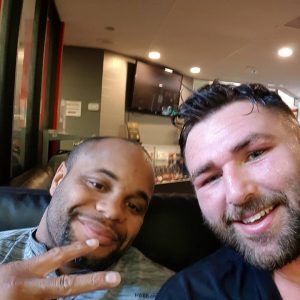 Currently competing in the heavyweight division of the Ultimate Fighting Championship on the 25th November James will fight Cyril Asker in Shanghai- the first ultimate fighting championship to ever be held in China.

James, 29 first tried out the sport when he was 19 while working in construction after his dad took him to his first MMA class. He said: “From the second I tried it I fell in love with it. My dad was the one who introduced me to it-he really is my driving force”.

The champion has been a user of CBD life UK for over a year now after first hearing about it through the media. He said “In terms of the CBD products I use, the capsules are my favourite. They help me massively in terms of sleep and with the inflammation of my body due to the nature of the sport”

“For me rest is just as important as training- if you aren’t well rested that’s when things can go wrong. I always make sure I am fully rested before I train again. The products from CBD Life UK really help with my sleep and rest.”

Born and raised in South Shields, Tyne and Wear, UK, Mulheron began his amateur MMA career in 2010, going undefeated at 4-0 and then going on to capture The Made4The Cage Amateur Heavyweight Championship. In 2012 James established himself among the top UK MMA heavyweights. Over a period of five years he achieved a record of 10-1 under the Made4The Cage banner as well as fighting for Bellator.

Five of his 11 victories have come on points and he’s always fit and ready to go at an unbelievable pace for the full fight and after being ranked as the UK’s number one heavyweight he said: “After years of long and hard work I’m so happy to be seeing results now.”

He might think of himself as the new breed of heavyweight but the down to earth and family orientated man enjoys playing golf and binging on game of thrones in his spare time.

Mulheron’s UFC journey started when he faced Justin Willis in July-losing by unanimous decision, but he says there’s no reason he can’t go all the way and become the UK’s first ever UFC heavyweight champion.

Best of luck from all of us at CBD Life UK!