Two weeks after first trying out the combat sport MMA, Justin Burlinson knew he wanted to fight as a professional in the UFC and make it to the top.

It’s no surprise to anyone, then, with a record of 31 wins to 1 loss that he’s definitely proving himself as one to watch. 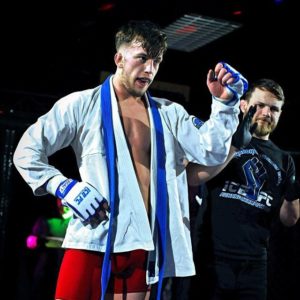 The rising star, 20, first got into Mixed Martial Arts after his Dad took him to train at The Dungeon BJJ & MMA Academy in Stockton, England. He said: “At first I started training Brazilian Jiu Jitsu but I quickly moved onto focusing on all areas of MMA. Now I’m a professional and I have had 32 fights in total.”

Looking back, you would think it would be hard for Justin to pick the most memorable moment of his career.  However, for him, it’s the build up to the fight that excites him the most and always pushing himself to be the very best version of himself.

Justin’s Mother was the one first introduced him to CBD. He said: “My Mam works in a hospital and has only ever had great things to say about the use of CBD”

“The products I have been using from CBD Life UK have really helped me with my sleep pattern. I’m not the greatest sleeper so using this helps with my recovery and being fresh and ready to train the following day”

“I’m trying out a bit of everything with regards to the different CBD products at the minute. I’m trying to see what works best for me.”

With such a rigorous training regime, Justin rarely ever gets any time for himself, but he describes his favourite spare moments as those after a fight where he can enjoy all the food he normally couldn’t eat on a strict diet.

Justin will next be action on December 15th fighting for Bamma at the Metro Radio Arena, Newcastle.