Who is Professor Raphael Mechoulam? 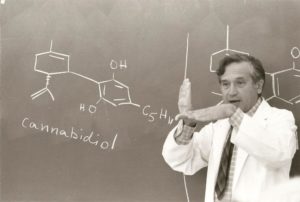 It hasn’t even been 30 years since Israeli Professor Raphael Mechoulam discovered our Endocannabinoid System and since then, as the research continues, we now know it’s the biggest network in our body.

the endocannabinoid system essentially regulates all our basic bodily functions! Endo, meaning originating within the body and Cannabinoid, the name that refers to the group of compounds within the body that activates this system.

It’s a well-known fact that Cannabinoids are a vital part of human health. Although the Endocannabinoid system performs differently in each tissue in the body, the overall goal is always the same-to maintain stable internal conditions to survive!

But, who is the man behind one of the biggest discoveries of our time?

Raphael Mechoulam, a professor at Hebrew University in Jerusalem, started studying cannabis in the 1960s. He has had a lifelong fascination with the chemistry of the cannabis plant and is now considered the grandfather of medical marijuana research.

By 1963, Mechoulam and his research partners had revealed the structure of cannabidiol (CBD), a key ingredient in cannabis.

He discovered the plant’s two psychoactive substances which are CBD in which he revealed the structure of, and tetrahydrocannabinol (THC), which are now being investigated continuously by scientists all over the world.

The Professor also found your EC system to be receptive to chemicals found in the cannabis plant and is the reason people feel “stoned” or “high” when using the cannabis recreationally.

Mechoulam was born in Sofia, Bulgaria on 05th November 1930. In 1944, Mechoulam’s father survived his time in a Nazi concentration camp, before the entire family relocated to Israel in 1949.

Originally, Ralph was studying chemical engineering however he switched to Chemistry. His love of the study of the cannabis plant came about from a natural extension of his obsession with research and curiosity of the plant.

It is with thanks to this man that mainstream science is delving deeper and deeper into the relationship between CBD and human physiology.

Dr. Mechoulam is currently 86 and teaches at Hebrew University in Jerusalem.  It is because CBD works so efficiently because of the endocannabinoid (EC) system.

Who are the Cannabis Trades Association UK?

December 20, 2017
We use cookies on our website to give you the most relevant experience by remembering your preferences and repeat visits. By clicking “Accept”, you consent to the use of ALL the cookies.
Cookie settingsACCEPTREJECT
Manage consent