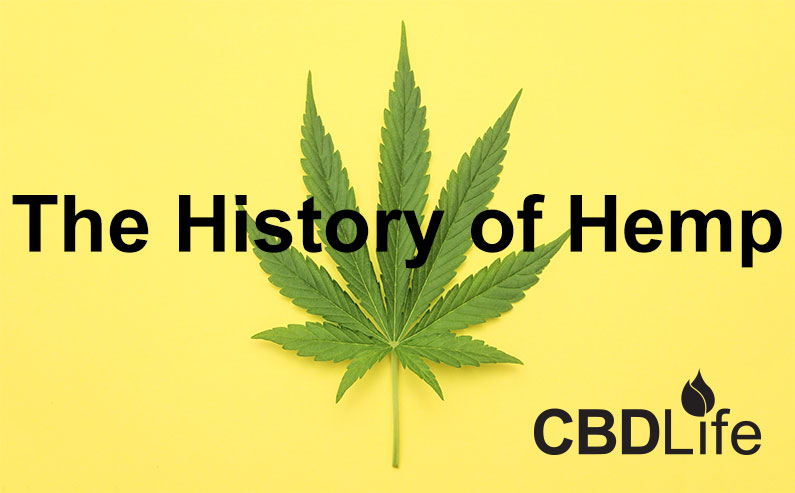 The History of Hemp?

Hemp, it’s an ancient plant! Infact, it’s one of the oldest cultivated crops on the planet.

It has been in continuous use by human civilization since at least 10,000 years ago and carbon tests have actually suggested that the use of wild hemp dates as far back at 8000 B.C.

Cannabis has been found on every single continent on the hemisphere, and more than likely, it was used long before it’s first ever recorded uses. A piece of hemp fabric is one of the oldest artefacts that’s ever been found on earth.

In 1977, Carl Sagan, an American astronomer, astrophysicist, and astrobiologist, suggested that marijuana may have been the world’s first agriculture crop, leading to the development of civilization itself.

Around 600 BCE, hemp rope appears in southern Russia. Around 500 BCE, hemp seeds and leaves of the Cannabis plant are included in burial sites. China (100 BCE) and the Arabs (900 BCE) discover ways to make hemp paper. Hemp rope shows up in England (100 BCE) and for the next 700 years, most of the paper is made with hemp.

In England hemp cultivation dates back to 800AD. In the 16th Century, Henry VIII encouraged farmers to plant the crop extensively to provide materials for the British Naval fleet. A steady supply of hemp was needed for the construction of battleships and their components.

America could not have waged its revolution without hemp. For a long time, hemp was the top cash crop. The Declaration of Independence was drafted on hemp paper. Hemp plantations flourished! Abraham Lincoln uses hemp seed oil to fuel his household lamps.

There was once a time in American history when farmers could actually be fined or jailed for not growing hemp because it was such a valuable crop. For over 200 years in colonial America, hemp was currency that one could use to pay their taxes with!

There at LEAST 30,000 known uses for hemp-and the list is still growing.

Hemp can be used for so many things in including for food; hemp seeds are an incredible source of a complete protein. They are used in food products like granola, hemp milk, protein and organic body care products. The oil can be used for hair and skin care, as well as detergent. Hemp fibre is used in textiles, biofuel, building material, medicine, paper, cordage, hemp-derived cellulose for plastic composites and a great deal more uses.

Another great thing about the hemp plant is that it is ready to harvest quickly. Within four months of being planted in the right conditions, it can grow up to 20 foot tall.

So, what’s the difference between Hemp Seed Oil and Hemp Oil?

Hemp seed oil is much different than CBD oil/hemp oil.

Hemp seed oil is a hemp extract taken from the seeds of the plant. Industrial hemp is the only plant used for this type of hemp oil. The seeds of the hemp plant can be used to create a delicious oil like olive oil.

There are no cannabinoids such as THC or CBD present in the oil since hemp seeds are not psychoactive.

Hemp seeds oil is known for its great taste and for the high values of unsaturated fats, such as Omega 3 and Omega 6.

You may notice hemp seed oil as an ingredient in some of your beauty products or while shopping at the supermarket. Although hemp seed oil is beneficial, it is different from CBD oil.

Quite often, when people come to us to buy CBD oil and they read ‘hemp oil’ on the bottle they immediately think it is not the stuff they need for their health. Incorrect! Our CBD oil says hemp on the bottle as it’s made from hemp-simple as that, but it is still CBD oil

A lot of the time people call CBD oil “hemp oil”. This is accurate because both oils come from hemp. If you are buying CBD oil or hemp oil you are good to go! We chose to use the term ‘hemp oil’ on our products as it carries the least stigma.

Is Hemp the best Plant Based Protein?

The History of CBD – Who Discovered CBD Oil?

January 30, 2019
We use cookies on our website to give you the most relevant experience by remembering your preferences and repeat visits. By clicking “Accept”, you consent to the use of ALL the cookies.
Cookie settingsACCEPTREJECT
Manage consent