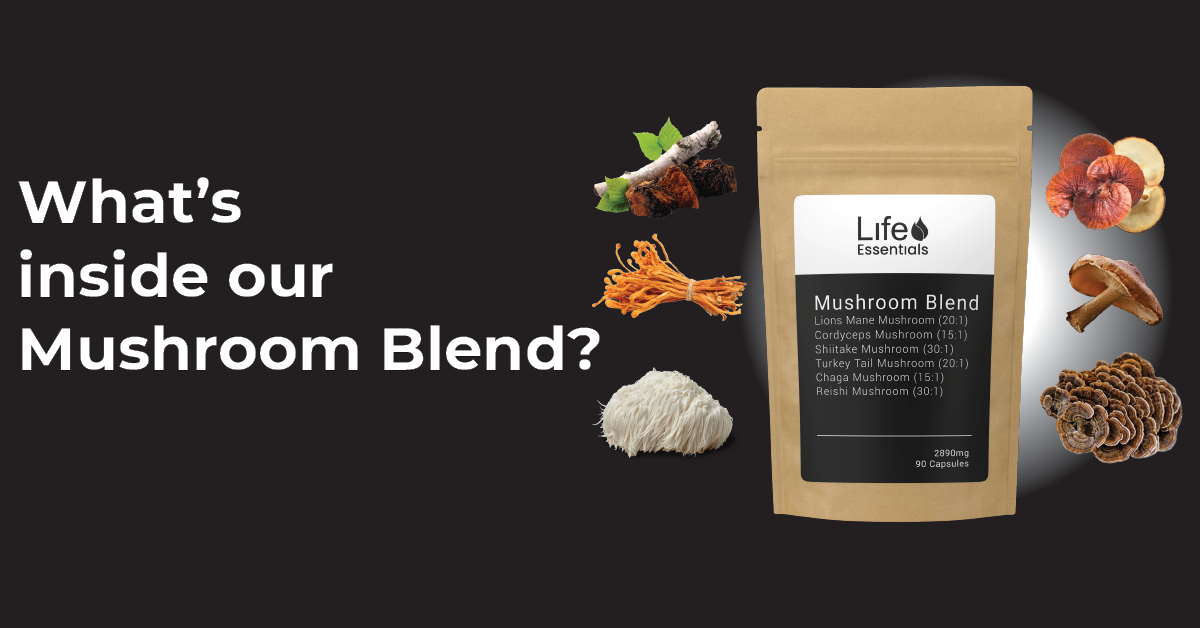 The rise of nootropics supplements has been staggering. But why take copious amounts of capsules when you can get all your mushroom goodness in one?! The CBDLife Mushroom Blend contains 6 of the most popular mushrooms on the market, in one handy capsule?

In this blog, we are going to take a closer look at the mushrooms which make up our mushroom blend.

Lions Mane-
Lions Mane (Hericium erinaceus) is a mushroom used across Asia for many years, namely in traditional chinese medicine. There name comes from the way they look, as they grow, the strike a resemblance of a Lions Mane.

With so many products being available, we knew it was important to make sure we only sold the highest quality lions mane mushroom extract, that’s why ours is a 15:1 extract.

Cordyceps-
Cordyceps mushrooms are believed to have been discovered around 2000 years ago and have been used ever since in Chinese and Tibetan medicine. The fungus originally only grew in high altitude areas of the himalayan mountain

The mushroom, in its original form, has fascinated mycologists for many years due to the unique way in which they take their form. A large majority of Cordyceps are grown on the larvae of insects, particularly caterpillars; attacking the animal and ultimately taking over the caterpillar’s body and using it as a host. However we have opted for the vegan variation of the mushroom. Cordyceps can be cultivated with only plants.

Shiitake-
Unlike many of the other mushrooms we have on site, Shiitake mushrooms are regularly found in culinary dishes; with the popularity of the fungi stemming from it’s regular use in Asian cuisine.

Having been believed to have been discovered back in 1209, the mushroom is believed to be the oldest known cultivated mushroom. It took until 1930 before the mushrooms hit commercial production but how the small brown mushroom can be found in almost every supermarket.

Chaga-
Chaga is a mushroom which is extremely popular in the Western World. It generally grows on birch trees in cold climates around the globe. As with so many mushrooms, Chaga has been used in Traditional medicines in such places as Russia.

Traditionally, Chaga was used in teas however as the popularity of the mushroom increased, as did the methods of consumption.

Turkey Tail Mushroom-
Turkey Tail Mushrooms are grown year round, in many parts of the world. Known as the ‘cloud mushroom’ it developed its name from its distinguishing layered stripes, resembling a Turkey’s Tail; not because it contains any animal parts; it is strictly vegan.

However, Turkey Tail hasn’t always been consumed. The fungus used to be used as a table decoration due to its colourful appearance.

With so many products being available, we knew it was important to make sure we only sold the highest quality Turkey Tail mushroom extract, that’s why ours is a 20:1 extract, you can read more about what that means further down this page.

Reishi-
Often referred to as the ‘king of mushrooms’ Reishi Mushrooms are rapidly becoming one of the most popular forms of fungi supplements on the market. The royal links to the mushroom don’t just stop with the name. The mushroom was exclusively reserved for Royalty when first used in Asian countries!

The Difference Between Hemp and Cannabis

Does CBD interact with medication?

Why Put CBD Oil Under The Tongue?

March 27, 2018
We use cookies on our website to give you the most relevant experience by remembering your preferences and repeat visits. By clicking “Accept”, you consent to the use of ALL the cookies.
Cookie settingsACCEPTREJECT
Manage consent