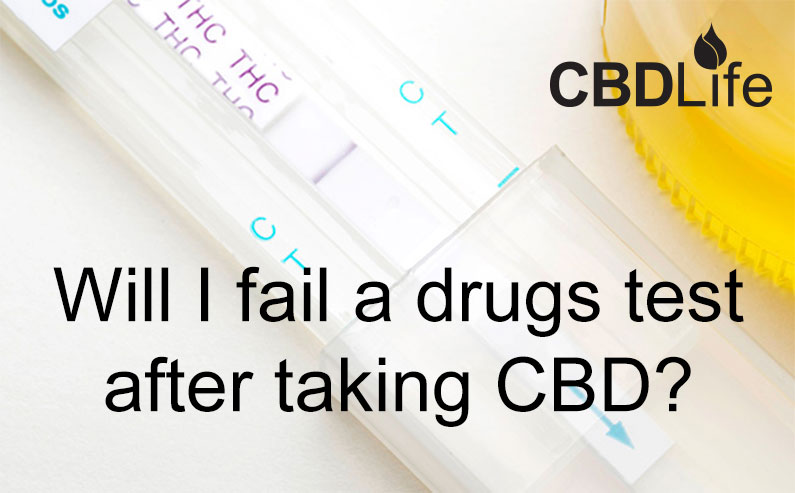 Here at CBD Life UK, we often receive questions and concerns from people who are hesitant to begin taking CBD in fear of them failing a drugs test. We wouldn’t want people being afraid of losing their jobs from using our products.

In many workplaces drug testing is common, if not mandatory and more workers than ever before are being subjected to drug screening. Even before initial employment has taken place, some employers have drug testing down as a common condition before you get the go ahead.

As we’re sure many of you know, drugs tests aren’t just for cannabis. They are also there to detect things like cocaine, opioids, amphetamines and more. Depending on what it is that you have been taking and how often, detection of it through a drugs test can be possible from a few hours to weeks later!

We know how important it is to be confident in the company you are buying CBD products from by knowing the potency and safety of the products. So, here’s the facts:

CBD is a hemp compound that doesn’t make you ‘stoned’ or ‘high’. When it comes to cannabis, drugs tests pick up THC (the compound that does make you high).  Drugs test are carried out because THC is known for psychoactivity and feelings of euphoria and this is the illegal part!

Most hemp oil or CBD products are sold with only trace levels of THC so most consumers shouldn’t have a problem passing a drugs test.

All of this said, it is not common for CBD users to turn out a positive drug test for THC. Yet, sometimes when people are new to consuming full spectrum CBD, it can trigger what is known as a false positive.

It is also important to note that CBD was found to interact with the body’s metabolism of certain compounds. What this means is that CBD users who also use cannabis may actually show higher levels of THC for a longer period of time than when using cannabis alone.

Another example we can give to reiterate this is poppy seeds: While poppy seeds don’t actually contain morphine, the seeds can become coated by, or absorb, opium extract during harvesting. Research shows that morphine and codeine can sometimes be detected in the urine up to 48 hours after ingestion of poppy seeds from some pastries, such as bagels, muffins, and cakes.

USADA cannot predict the amount of poppy seeds you can eat and remain within a threshold to still pass a drugs test.

July 13, 2018
We use cookies on our website to give you the most relevant experience by remembering your preferences and repeat visits. By clicking “Accept”, you consent to the use of ALL the cookies.
Cookie settingsACCEPTREJECT
Manage consent